The Third Doctor Adventures Volume 8 sees two new four-parters for Tim Treloar as the Doctor. Conspiracy in Space sees a return for the Draconians in a follow-up to the 1973 tale Frontier in Space. Meanwhile, The Devil’s Hoofprints finds the Doctor and Sarah back in the 19th century for a monstrous encounter. 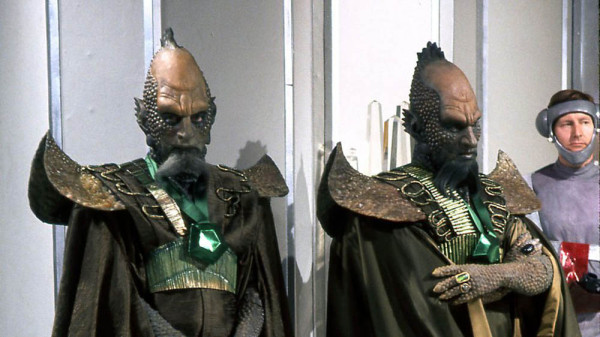 The Eve of the (Space) War

Eight volumes into these Third Doctor tales, it is surprising that thoughts have not turned to the Draconians before. Despite only appearing onscreen for one story, they are visually striking and oft-mentioned as one of Jon Pertwee’s favourites. As suspicious of Earthmen as the humans are of them, their codes of honour and deference make them fascinating adversaries.

Conspiracy in Space begins with the intricacies of an arranged marriage on Draconia. The noble Lady Zinn is much put out, as her daughter has been overlooked by the young emperor. However, her political rival the Grand Widow, appears to be having none of it; her imperial offspring has chosen a love match.

Dropped amid this spat by the TARDIS, Jo and the Doctor find themselves two decades before the Earth-Draconian conflict. When an Earth ship approaches Draconia, the tale expands into a planet-hopping space opera, filled with pleasing pop culture references.

Writer Alan Barnes digs gamely into the highly stylised aristocracy of Draconia. Familiar formal phrases such as “my life at your command” reoccur, but there is also plenty of skulduggery; the perception of honourable conduct always being more important than actually acting with any. It is fun to hear Malcolm Hulke’s ideas expanded and, naturally, everything smartly fits within established continuity.

In the guest cast, Issy Van Randwyck’s Grand Widow and Imogen Church’s Lady Zinn are hilarious; they circle each throughout the story, purring insults. Aurora Burghart’s supercilious Emerald feels permanently on the edge, while Barnaby Edwards’ general is a blustery delight. There is palpable chemistry too between Jo and Sam Stafford’s honourable but nervy Lt Ruji. 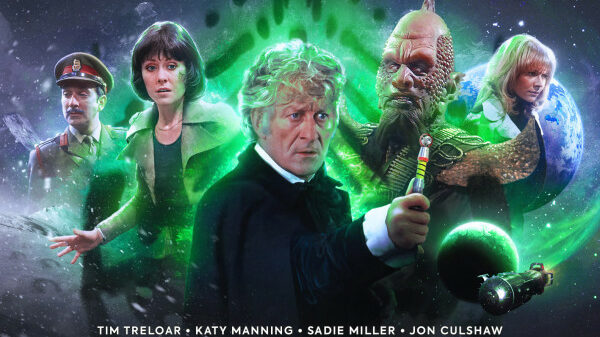 Sympathy for the Devil

The TARDIS arrives in a rural Devon village, reuniting the Doctor and Sarah with the Brigadier. He is there to make a routine safety investigation of a research centre in the wake of a mysterious death. While the Doctor’s keen to pursue the scientific angles, Sarah prefers devilish local folklore that might entertain her editor.

On the base visit, the trio find the lead scientist Chiltern keen to show off. However, when things go awry during a test run, the Doctor and Sarah are forced to escape to the past; in 1855, the same village is plagued by mysterious footprints in the snow, attributed to the devil himself. And, trapped in the present with the devious Chilton, the Brigadier is in for the fight of his life!

Starting out as a seemingly conventional UNIT story, Robert Valentine’s story spins into something rather marvellous, playing out in dual time zones. As the principal villain, Chilton, Barnaby Kay is terrific. He suffuses the character with a kind of suppressed mania, and it is electrifying to listen to.

Children’s TV legend Derek Griffiths is the batty amateur meteorologist, the Reverend Mr Woolsgrove, while Robert Haws plays the local stuffed shirt, the squire and big game hunter Sir Basil Hexworthy. Both come vividly to life with endearingly eccentric performances. Caroline Seymour’s deep in an accent too, playing two members of the Plymtree family. She also voices a base technician, while Nicholas Briggs distorts his vocal cords magnificently to bring us the monster itself.

Interestingly, Big Finish’s 2019 narrated Short Trip The Devil’s Footprints, for the Seventh Doctor and Mel, was based on the same phenomena; pleasingly, this tale leaves space for alternate explanations. Let’s face it, we fans are used to this – consider the various destructions of Atlantis for example.

The regulars are all at the top of their game here. Tim Treloar’s take on the Third Doctor just gets better, while Katy Manning brings forth all of Jo’s familiar compassion. As the Brigadier, Jon Culshaw continues to entertain, while Sadie Miller truly impresses as Sarah; there were numerous moments when we forgot we were not hearing Elisabeth Sladen.

Conspiracy in Space is a high-concept romp, with numerous spaceships and plenty of derring-do, while with well-drawn characters and a terrific monster, The Devil’s Hoofprints is a satisfyingly chilly treat of a tale. With excellent sound design and a pitch-perfect period score from Nicholas Briggs, these slices of Pertwee era action are fantastic.

Doctor Who: The Third Doctor Adventures Volume 8 is available on download and CD from Big Finish.