Master! sees Eric Robert’s incarnation of the dastardly Time Lord, first seen in the 1996 TV Movie,  let loose. While he has returned a few times on audio, most recently in Masterful, this boxset offers the villain centre stage.

Along for the ride too is Big Finish’s homegrown heroine Vienna Salvatori (Chase Masterson). The impossibly glamourous bounty hunter with a conscience has been contracted on the contract-killing job of a lifetime. Her target – who else? 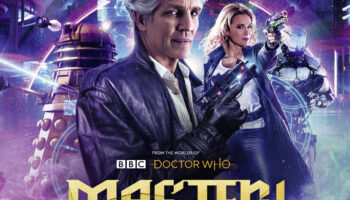 Back Once Again for the Renegade Master

On a post-Dalek invasion Earth, the race is on to create the technologies needed to fend off a further attack. However, strict rules have been placed upon technological development, and Drake Industries are keen to make progress. Focussing on the ambitions of scientist Lila Kreig, Robert Valentine’s Faustian slowly teases the manipulative Master back into corporeal form.

Despite the monster we know she is going to unleash, we remain on Lila’s side for the most part as she struggles against numerous obstacles to complete her work. With Mega-Corporations dominating, there are Bladerunner-style dystopian vibes here and adverts in the background help fill out the world. Naturally, such a world needs a leader and the Master feels he fits the bill perfectly!

The timeframe jumps on for Prey, with the Master having all the resources of Drake Industries at his disposal. An all-action tale, it also brings in Vienna, paring her with an amusing droid, Artie, to assist her completion of the contract.

When the Master survives her initial attack, Vienna gives chase into the lawless slums of London. The villain, however, always lands on his feet and naturally gravitates towards the centre of power – in this case a thuggish gangland boss known as King Muggy.

Writer Robert Whitelock illustrates how people survive in this fractured world. You get a feel for the desperation of the Master too and how disposable Lila is to him despite all they have achieved together.

Defender of the Earth

Reintroducing the Daleks, writer and script editor Matt Fitton’s Vengeance sets the stage for a grudge match; the Master standing as an unlikely champion against the (re)invaders, keen to make them pay for all he has endured. There is a feeling of catharsis as he cuts swathes through the drones who come for him with some specially designed weaponry!

Allegiances shift as the story builds and there is more than one Dalek agenda at play; Nicholas Briggs voices both a familiar sounding Dalek Litigator and the Supreme Dalek, as well as host of others.

Eric Roberts’ charismatic villain is quite different from other Masters; while he schemes and jokes, he is capable of brutal acts of physical violence too. He is desperate and traumatised, which makes his revenge on the Daleks all the more satisfying!  Big Finish have done so much for the Eighth Doctor, so it is great to hear his Master granted time in the spotlight. They may have crossed swords in Ravenous, but here’s hoping for a full-on, epic confrontation between the pair! For her part, Chase Masterston is on her usual engaging form and Vienna provides an unusual challenge for the Master. The two are well-matched and, oddly, work rather well together.

In her companion-like role, Laura Aikman instantly sparkles as Lila Krieg. From her scientific passions to her parental issues, she’s a fully-rounded character in whom it is easy to become invested. We particularly loved her affectionate interactions with her computer Ariel, whom she calls ‘Babe’. Naturally, she fades a little into the background with both the Master and Vienna are on the scene – but Lila ends up in an interesting place and is a character we would happily hear more from. Among the guest cast, Andrew James Spooner shines in the dual roles of Artie and the dim-but-deadly King Muggy.

Despite a production split across the Atlantic, with Eric Roberts and Chase Masterson recording in the US,  and impacted by lockdown, Big Finish’s production values remain excellent. Directors Jason Haigh-Ellery and Jamie Anderson keep the stories fun and fast-moving. Composer Howard Carter provides a menacing, sibilant theme for this Master too, which seems incredibly appropriate!

Master! packs in a tremendous amount to its three episodes: the rebuilding of the Earth, the Master’s resurrection, Vienna and the return of the Daleks. In fact, we wish there had been more time to explore some of the elements further; the Master’s plans for corporate global dominance seemed an idea full of dramatic potential. It feels, to us, as though there is ample space for this Master to rise again – and Eric Roberts clearly gets a kick out of playing the role too.

In the meantime, we also notice that there’s an upcoming Early Adventure which chronicles Susan’s time After the Daleks, although we imagine that will be quite different in tone.

Master! is available on download and CD from Big Finish.