Masterful celebrates the Doctor’s best enemy on the fiftieth anniversary of the character’s onscreen debut. An eight-disc collection, it contains the eponymous full-cast drama as well as two short trips and a longer narrated tale. The headline story also features the audio debut of John Simm’s “Harold Saxon” incarnation. 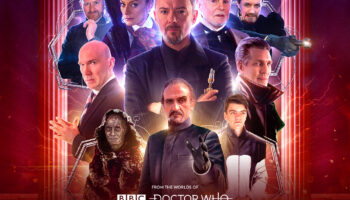 A three-disc, full-cast epic, Masterful has a lot going on. Big Finish’s previous Multi-Master story, Day of the Master, used four incarnations of the villain; this tale ups the ante with nine. United via time scoop are Geoffrey Beevers (Crispy), John Culshaw (playing Anthony Ainley’s version), Eric Roberts (from the TV Movie), Derek Jacobi (the War Master) and John Simm. Joining them are Alex MacQueen, (BF’s homegrown Resurrected Master), Mark Gatiss as the alternative universe Unbound Master and a young version of the character, played by Milo Parker (best known as Gerry from ITV’s The Durrells).

The Saxon Master is declaring victory; with an ego his size, who else is there to invite but his former selves? Having apparently defeated all his enemies, including the Doctor, he feels entitled to gloat. Naturally there is a wrinkle, he fumbles the collection of the Delgado Master and scoops Jo Grant (Katy Manning) instead. Failing to invite Michelle Gomez’s Missy is a major faux-pas too. As is neglecting to mention the uncontrollable wave of death busy ravaging the planet! 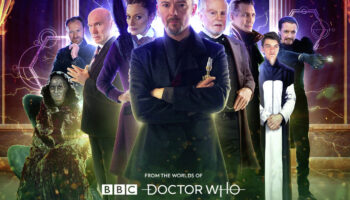 After the initial get together, the protagonists are paired off in separate story strands, exploring aspects of the Master’s character. The Resurrected Master finds himself locked in the hold of a refugee ship, struggling to be recognised by its robotic staff, while the young Master has apparently become its Captain. Meanwhile, Missy and Jo explore the Master’s world, while the War and Saxon incarnations enjoy a road trip, of sorts.

For us, the most interesting tale here is that of the Crispy Master, who finds contentment and even a little romance. He develops a relationship with a lonely woman, neither caring to probe too deeply into each other’s past. That’s before the charming Roberts version turns up and sows seeds of discontent, of course.  The other incarnation which who really fascinates is the pragmatic young Master; still working out who he is and horrified at the callous nature of his later selves.

With so much happening we got a bit lost towards the end and wondered at the inclusion of Mark Gatiss’ incarnation. While entertaining enough, including some over-the-top flirting with Missy, we are not sold on what his Master ultimately contributed.

James Goss’ story provides ample opportunity for the different Masters to interact and plenty of memorable moments. Unlike the Doctors, who will bicker but ultimately unite, the Masters’ essential nature leads them in a different direction; inevitable, but tremendously fun to listen too. Masterful is dizzying stuff, with plenty of potential for multiple re-listens.

The fourth disc contains two narrated tales, both previously only available as downloads. Simon Guerrier’s The Switching sees the Master swap bodies with the Doctor as he engineers an escape from UNIT custody. The remarkable I Am The Master, written and performed by Geoffrey Beevers, was first released in 2018. It sees the villainous Time Lord give an unusual first-person perspective on one of his meticulous machinations.

Terror of the Master

Discs five to seven contains the narrated tale Terror of the Master. Set just after The Green Death, with everyone reeling from the departure of Jo, it finds the Doctor at a loose end; worried he might resume his travels, the Brigadier is keen to find an investigation to occupy his talents. When an international energy crisis looms, a noted celebrity scientist puts forward a nuclear plan to save the day. The Doctor however, believes he sees the Master at work and UNIT are soon entangled in his latest takeover plan. 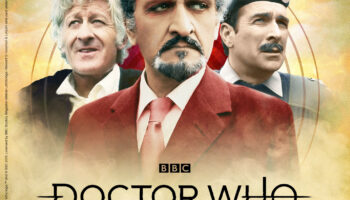 Trevor Baxendale’s story is a love letter to those UNIT years, with an ecological theme and steeped in pleasing references. We loved the trip to Television Centre and the introduction of the Whomobile, not to mention Mike Yates’ green leanings.

Performed by Jon Culshaw, we enjoyed the enthusiastic narration as well as his takes on all the principals; we know his Brigadier, Master and Doctor, here he adds affectionate takes on Yates and Benton to his arsenal too. Terrific sound design and music bring a true “Action by Havoc” feel to the proceedings. We enjoyed a tense standoff in the Doctor’s lab and a thrilling ride in Bessie, chased by motorcycle gunmen through Shepherd’s Bush.

Terror of the Master is a perfectly pitched send off for Roger Delgado’s original incarnation of the Master; one that we were sadly denied onscreen due to the actor’s tragic death. It is a delightful slice of 1970s action adventure and for us, the highlight of this boxset.

The final disc contains interviews, primarily with the cast and crew of Masterful, but also with Jon Culshaw and Trevor Baxendale regarding Terror of the Master. For his part, Eric Roberts reminisces about filming the TV Movie; coincidentally, he has returned to the role again for his own boxset Master! released in March.

The Masterful (Limited Edition) is available as a CD boxset, or on download from Big Finish. The Masterful audio drama itself is also available separately in both formats too.