After being drawn back, sans-TARDIS, the Doctor has been seeking a way to his own time. He has been aided in this quest by Space Security Service agent Anya Kingdom, with whom he has a complicated history. 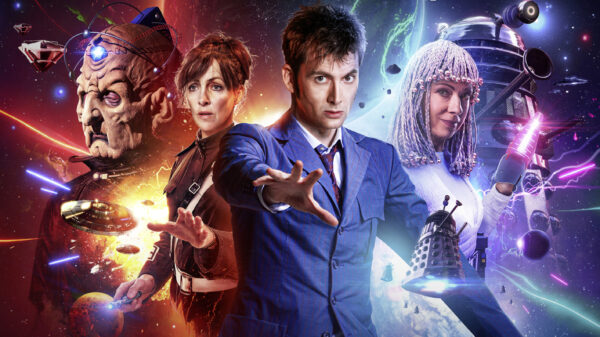 However, at the end of the last boxset, the Doctor and Anya found themselves thrown forward in time, escaping a bubble universe. While the Daleks were a minimal presence across volumes 1 and 2, they are here in force.

Jumping straight back into the action, the time travellers barely have time to contemplate the head-spinning cliffhanger of the last tale: a transmission from a Dalek with River Song’s voice, saying “Hello Sweetie”. The pair have arrived at the height of the Dalek/Movellan War. Trapped intractably in conflict with the logical android race, the Daleks are having the fight of their lives; it is a war the Doctor knows all too well.

The First Son brings us to a shielded planetoid amid the battle, where human survivors are managing to stay alive. This they achieve thanks to a remarkable Movellan and his rather familiar Mother. 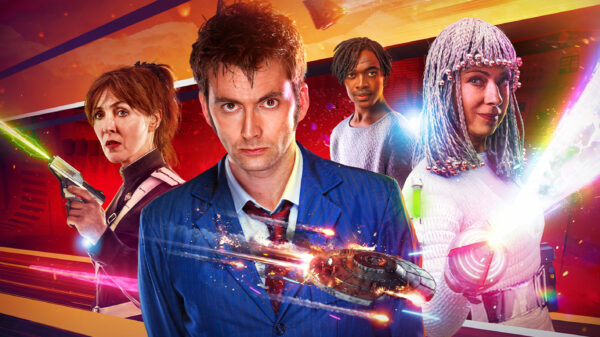 Lizzie Hopley’s story provides an interesting puzzle and plenty of action as it and builds to another action-packed cliffhanger. It also successfully reintroduces the disco styled Movellans. We loved the concept of the planetoid, built from successive crashed and crushed spaceships. For her part, Alex Kingston gives us a different spin on River and we were kept guessing at her motives. Although arguably her presence, albeit fun, serves only to seed a single clue.

The series draws to a close with thumping great two-parter, The Dalek Defence and The Triumph of Davros. Written by Matt Fitton, we are pleased to say it is indeed great. 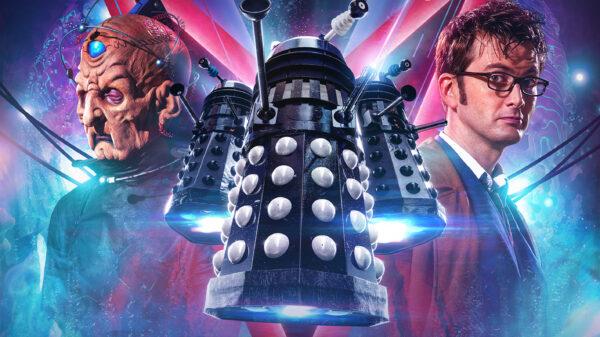 Rescued by an earth ship, the Doctor and Anya find themselves in danger from the Daleks. Fleeing the battle zone, their saviours have a much sought-after cargo on board: the Dalek creator, Davros. Kept on ice, the humans, the Daleks and the Movellans all have designs on using his unique skills. Each party seems to believe they can use him to tip the balance of the conflict in their favour.

Naturally, when Davros is unleashed, he soon begins to turn matters to his advantage and develops an even more monstrous situation. While he and the Doctor meet the First Movellan, Anya encounters the Daleks on a worringly familiar, temporally ravaged planet. 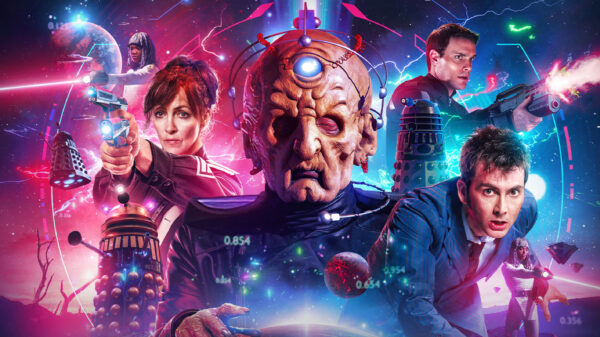 Resurrection of the Daleks echoes here, and we feel the familiarity of the situation with the Doctor. He also reflects darkly on his failure to avert the Daleks’ creation and on what Davros will become. The story provides a thumper of a reveal at the midpoint too, one which brilliantly creeps up on you; although you don’t see it coming until a few moments before, it instantly makes perfect sense.

We are remaining necessarily spoiler-lite here as this is a terrific high-stakes series finale you deserve to experience properly. It pays off the previous two boxsets as well as giving nods back to the earlier Sara Kingdom/Ann Kelso tales with the Fourth Doctor. It even looks as far back as The Chase!

Having aired their secrets and cleared the air, the Doctor and Anya now transition into a more honest friendship. Thoughts of her Ann Kelso personality left behind them, Jane Slavin’s Anya is bright, capable, sarcastic, and incredibly loyal. She’s a perfect companion for the later, universe weary Tenth Doctor. It goes without saying that David Tennant sparkles in the role and it is clearly a joy for him to return. Narratively, his Doctor is left heading towards his part in The Day of the Doctor.

As the principal guest star, Terry Molly gives good Davros. The story allows him to rant and rave, but also the space to be duplicitous and cunning too. In the wider cast, we enjoyed Joseph Millson’s Colonel Keelan, he would be the square-jawed hero in another tale, and Ajjaz Awad impresses in a trio of very different roles too. As ever, Nicholas Briggs is on hand with a panoply of Dalek voices, we particularly enjoyed his croaky Dalek Analyst.

With Ken Bentley’s pacy direction, plus terrific sound design and score from Howard Carter, this is essential Doctor Who listening. If you have been following Dalek Universe, you will love it. If you haven’t, we really do recommend it. It might just send you back to a few old Terry Nation stories with fresh eyes.

More for the Tenth Doctor?

Despite this conclusion, Big Finish have still have a few David Tennant stories to look forward too. Wink, a Weeping Angel Sixth Doctor crossover, is scheduled for July 2022 while a Classic Companions boxset will follow in September. Plus an encounter with the The War Master in Self-Defence.

If there is anything else in the can, courtesy of his unexpected pandemic availability, it remains under wraps so far. However, with the tally of nine of Dalek Universe, three with River Song and two Out of Time stories so far, we have been totally spoilt!

Doctor Who: Dalek Universe 3 is available on download, CD and Vinyl from Big Finish.