Sherlock will return for a fourth season in 2017, following one-off special ‘The Abominable Bride’.

This news summary will be updated regularly as more details are revealed, with the latest updates at the top.

An * will indicate an unconfirmed rumour.

Steven Moffat and Mark Gatiss: “Whatever else we do, wherever we all go, all roads lead back to Baker Street – and it always feels like coming home.”

Steven Moffat: “…it’ll just be me and Mark [Gatiss] writing them this time. One each and one together.”

Steven Moffat: “We get slagged off for only making nine Sherlocks – Robert Downey Jr has made two in that time.”

Sue Vertue: “It’s taken a little while to get the dates sorted as none of the boys are exactly sitting back twiddling their thumbs but there was unanimous goodwill to make this work, so we’re thrilled that 221b is going to be inhabited again.”

Charlotte Moore, Controller of BBC One: “Massive thanks to Sue Vertue and Hartswood Films for pulling this off, it’s no mean feat pinning down some of this country’s most brilliant and in-demand actors and writers.”

Steven Moffat: “Had we done the conventional form of a TV series, which is to do runs of six or twelve, it would be over by now without doubt, it would be finished.”

Steven Moffat: “The fact that we only do it occasionally means it’s not swamping anyone’s schedule. Eventually, I’ll stop doing Doctor Who, because it stops me doing anything else. But Sherlock doesn’t swamp my schedule, doesn’t swamp anyone. So I could imagine we’ll come back and do Sherlock fairly often for many years, rather than very often for a few years.”

Steven Moffat: “I don’t think that [killing Magnussen] will change Sherlock. He certainly won’t be haunted by guilt. He’s way in control of his emotions enough to say, ‘It’s time to switch that man off.’ And again, he’s friends with John, who was laughing after he shot a guy minutes after he did it. These are dangerous boys.” 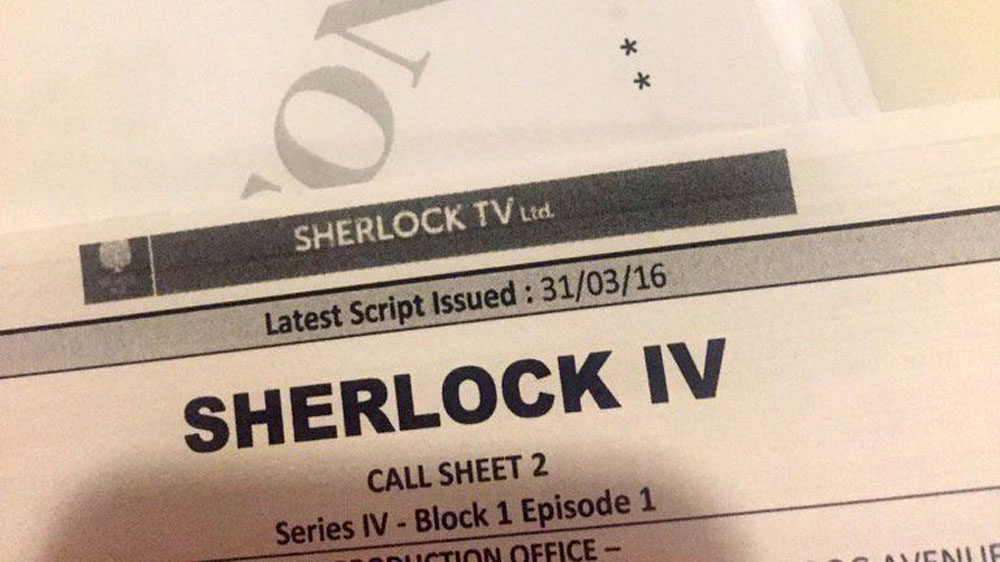 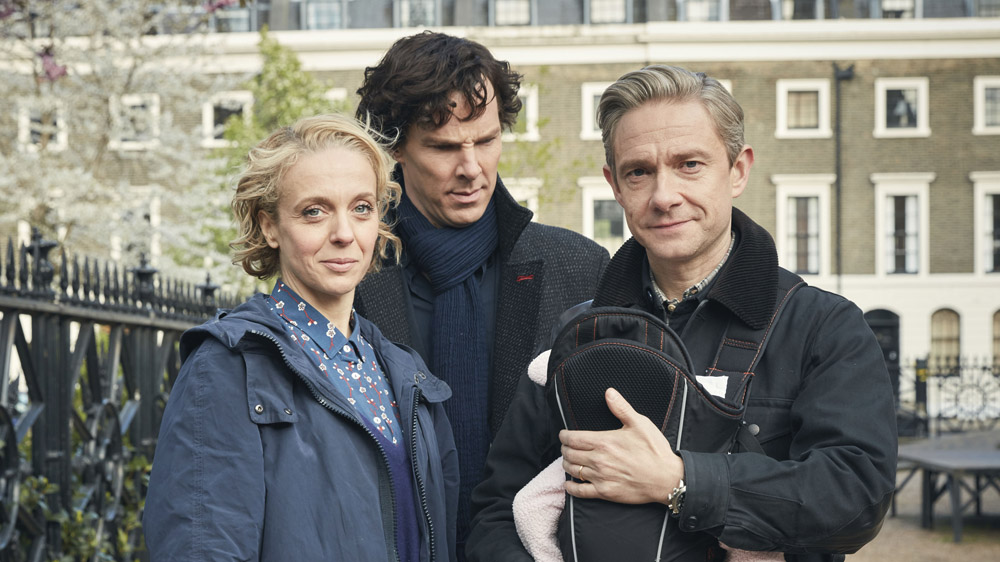 Mark Gatiss: “Things get resolved and there are evolving relationships.”

Benedict Cumberbatch: “I can’t wait for everyone to see Season 4. But you will have to wait… though not for long… And it will be worth it.”

Official synopsis: “[Season 4] begins with the nation’s favourite detective, the mercurial Sherlock Holmes, back once more on British soil, as Doctor Watson and his wife Mary prepare for their biggest ever challenge – becoming parents for the first time.”

Steven Moffat: “We do address the outstanding issues.”

Benedict Cumberbatch: “We’ve never seen [Sherlock] being really pressed yet, so that will be interesting.”

Steven Moffat: “We’re certainly going to put them through the mill. It’s going to be more of an emotional upheaval. Hopefully enjoyable and fun, all the things Sherlock must always be. It will be tough at times. Maybe that’s the word? A tougher series.”

Andrew Scott: “I think it’s very important with Moriarty that you don’t overuse him. I think the reason he’s been a success is because he has a mystery.”

Steven Moffat: “[Season 4] is going to be… consequences. Chickens come to roost. It’s dark in some ways…”

Steven Moffat: “…there’s a sense of… things… coming back to bite you. It’s not a safe, sensible way to live. It’s hilarious and exhilarating some days, but some days it’s going to be bloody frightening.”

Steven Moffat: “There are answers coming to questions which nobody has asked. There’s one thing that no one has really brought up…”

Mark Gatiss: “What we want to do for a fourth series is match [Season 3], but it’s not a question of saying ‘Well we need a baddie on that scale [of Charles Augustus Magnussen]’. It’s about trying to find stories that have that kind of scale to them.”

Ben Stephenson, Controller, BBC Drama: “Steven and Mark are ready to unleash the most shocking and surprising series of Sherlock yet. The only thing to expect is the unexpected…”

Martin Freeman: “What has been explained to me and Ben [Cumberbatch] and Amanda Abbington – my missus who plays Mary – has been very exciting. The plans they have for the overarching series – oh man, it’s just so exciting…”

Mark Gatiss: “…[Season 4] will take Sherlock and John Watson into deeper and darker water than ever before. The whole Sherlock team are terrifically excited to return for four new adventures.”

Steven Moffat: “Mary’s absolutely here [in Season 4]. We don’t just off her. How would that be at the start of the next series. ‘Where’s Mary?’ ‘Dead!'”

Andrew Scott: “All of our plans on Sherlock are long-term ones, so yeah, I certainly had a feeling that Moriarty’s storyline wasn’t over … I knew about that stuff years ago.” 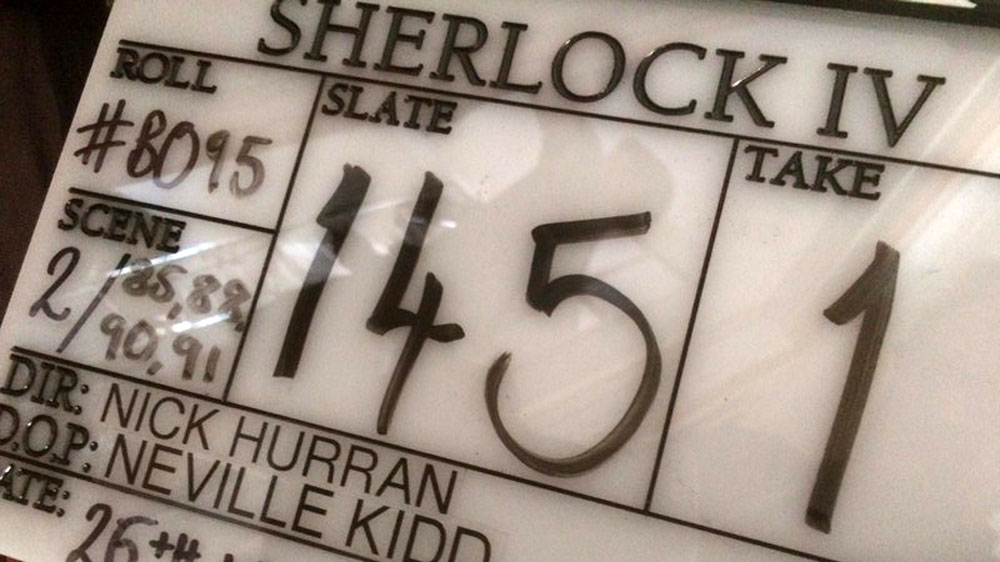 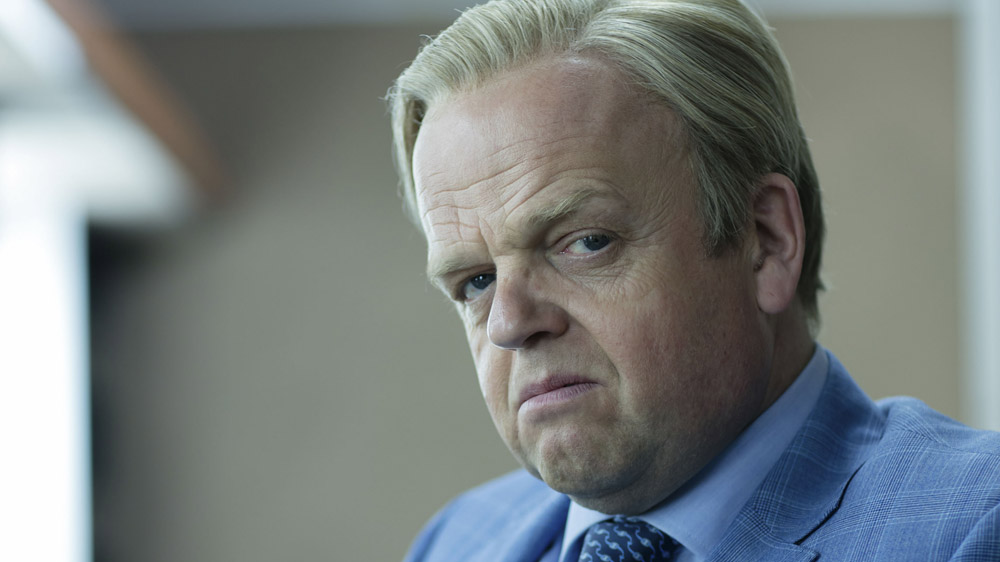 Mark Gatiss: “Toby [Jones] is doing something very interesting. He’s an avuncular, funny seeming man with terrible teeth. We’ve given him terrible teeth, which are symbolic of the rot inside him. It’s a great complex, shaded character. You’re not quite sure what the relationship is with him.”

Steven Moffat: “[Toby Jones is] the darkest villain we’ve had. This guy is the purest evil. Sherlock is actually appalled by him. He’s the most evil villain we’ve had. I don’t think that when you see it, you will disagree. He’s horrific.”

Benedict Cumberbatch: “You can perfect genius because genius is not perfection. On his level and his practice and his methodology, it’s almost inhuman. So, that’s been a fantastic arc to play, and boy does it go somewhere in this series.”

Benedict Cumberbatch: “…it’s great to see a real evolution of all the characters especially in Series 4.”

Toby Jones: “I’m excited and intrigued by the character I shall be playing in Sherlock…”

Steven Moffat: “Delighted to have Toby Jones on board, bringing to life one of Doyle’s finest villains.”

Mark Gatiss: “We’re thrilled to welcome one of our finest actors to the Sherlock family. I know Toby [Jones] will embrace the part with true relish!”

Sue Vertue: “Great to have Nick Hurran back after his fabulous work in series 3 and I’ve been wanting to work with Toby [Jones] for ages so this is a real treat.”

Steven Moffat: “We’ve got a clear idea what we’re going to do [in Season 4] and it’s going to be another shift in tone. Yes, there’s going to be some dark stuff coming, there always is, [but] there’ll also be lots of fun and jokes and detection and all that nonsense.” 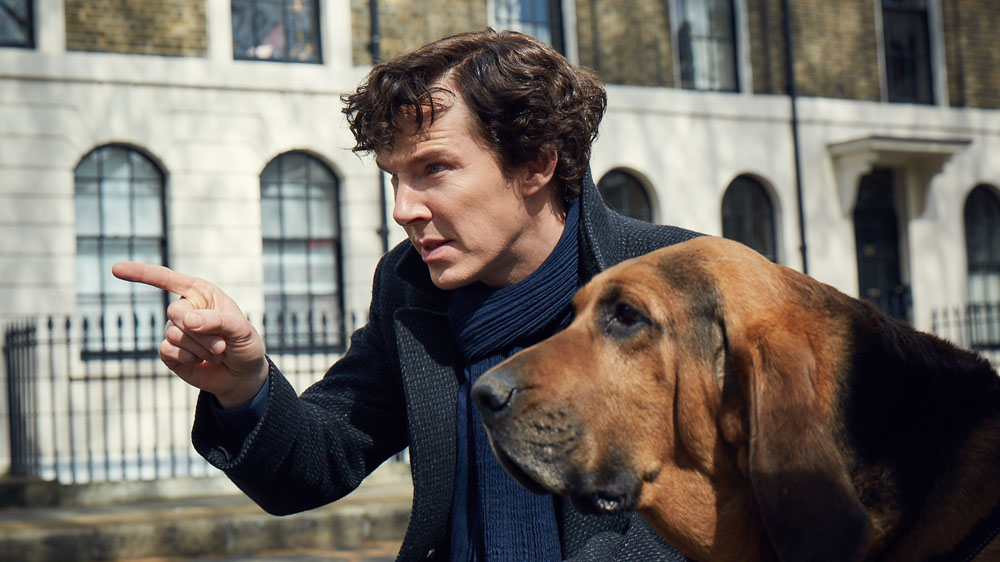 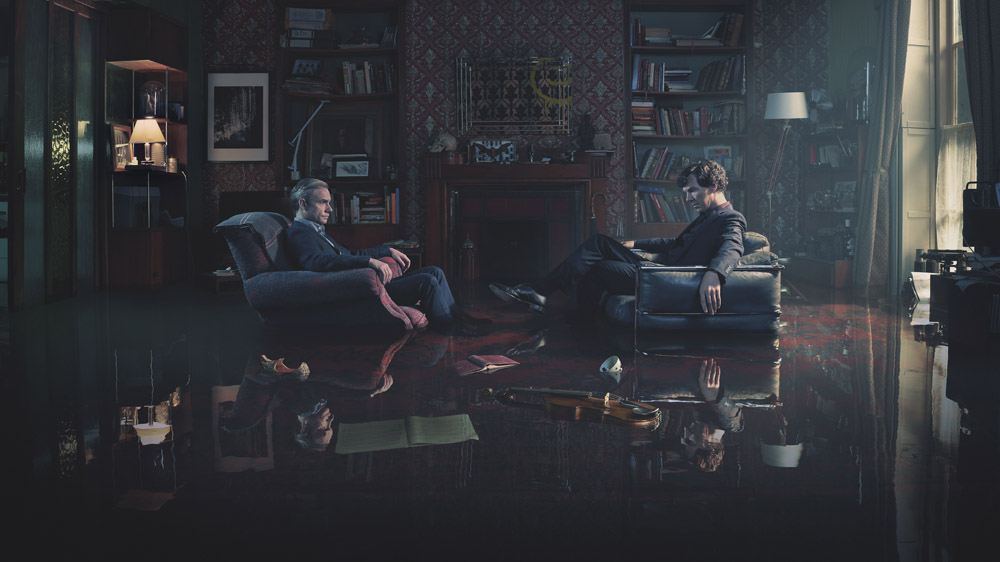 Sue Vertue: “Fans clearly enjoyed the opportunity of watching ‘The Abominable Bride’ in cinemas last time so Hartswood Films are thrilled to be working with BBC Worldwide again to do the same for this Series 4 finale.”

Mark Gatiss: “Just because [Mary’s death is] in the stories doesn’t mean it’ll happen in the series because there’s an awful lot of changes and an awful lot of places to go and things to do …  there are lots of surprises to come.”

Benedict Cumberbatch: “I’d like us to finish on a high, but we’ll do it until we don’t want to do it anymore … I’d love to do it into old age, I really would.”

Benedict Cumberbatch: “You’re talking about the end of the universe darkness.”

Steven Moffat: “Hopefully, there are lots of laughs and lots of great personal stuff, but it is explicitly a darker season.”

Benedict Cumberbatch: “I’m going to keep going with [Sherlock]. I play enough other mad people to vary the palate of what I’m scrabbling around in my head as a storyteller … I love [playing Sherlock]. I find it very invigorating.”

Amanda Abbington: “Series 4 is darkest yet and a real emotional rollercoaster.”

Steven Moffat: “All three stories [in Season 4] are based, as usual, to a greater or lesser extent, on Doyle’s originals, but you have to work out which bits.”

Steven Moffat and Mark Gatiss: “Ghosts of the past are rising in the lives of Sherlock Holmes and John Watson bringing adventure, romance and terror in their wake. This is the story we’ve been telling from the beginning. A story about to reach its climax…”

Steven Moffat: “We’ve worked out what we want to do [in Season 4 and Season 5]. But it wasn’t very professional, we didn’t schedule a meeting or anything. It was just enthusiasm. Like fan boys, we got excited about what we could do next with Sherlock Holmes.”

Mark Gatiss: “You can always expect tragedy as well as adventure, that’s just how it goes.”

Steven Moffat: “We have a plan to top [Season 3] — and actually I do think our plan is devastating … We practically reduced our cast to tears…”

Martin Freeman: “While we play fast and loose with the original stories, we generally follow the trajectory of what Conan Doyle did. So he [Watson] gets married, and then Mary dies – so at some point presumably she’ll die.”

Steven Moffat: “Rather excitingly, Mark [Gatiss] and I, for no particular reason, we just got out of the rain and sat at the top of the [Sherlock] production bus and we just started plotting out what we could do in the future – and we plotted out the whole of Series 4 and 5.”

Martin Freeman: “…all I know is we all like the show, we all want to keep doing it for as long as we want to do it and as long as we enjoy it.”

What do you want to see in Season 4? Let us know below…