This news summary on the tenth 21st Century season of Doctor Who will be updated regularly as more details are revealed.

Buy ‘The Return of Doctor Mysterio’ on DVD on Amazon here.

Who is the showrunner?

Season 10 will be Steven Moffat’s final year as showrunner.

Steven Moffat: “I’ll be finishing up on the best job in the universe and keeping the TARDIS warm for [new showrunner Chris Chibnall].”

Chris Chibnall: “…hearing [Steven Moffat’s] plans and stories for 2017, it’s clear he’ll be going out with a bang.”

Steven Moffat: “I’m just embarking on the new [season] and it’s terrifying. I have to make all that again.”

Will this be Peter Capaldi’s final season as the Doctor?

Peter Capaldi: “One of the greatest privileges of being Doctor Who is to see the world at its best. From our brilliant crew and creative team working for the best broadcaster on the planet, to the viewers and fans whose endless creativity, generosity and inclusiveness points to a brighter future ahead. I can’t thank everyone enough. It’s been cosmic.”

Peter Capaldi: “I’ve been asked to stay on and I haven’t made my mind up about that yet, mainly because I don’t want to have to make that decision. I’m trying to avoid it!”

Steven Moffat: “I have no reason to suppose that I’m writing out a Doctor! Peter is loving the role, and long may he do so.”

Peter Capaldi: “This could be my final year.”

The Mirror: Peter Capaldi has agreed to stay on for “at least one more [season] … Peter is keen to complete three years playing the Doctor to round off his storylines.”

When does filming begin? 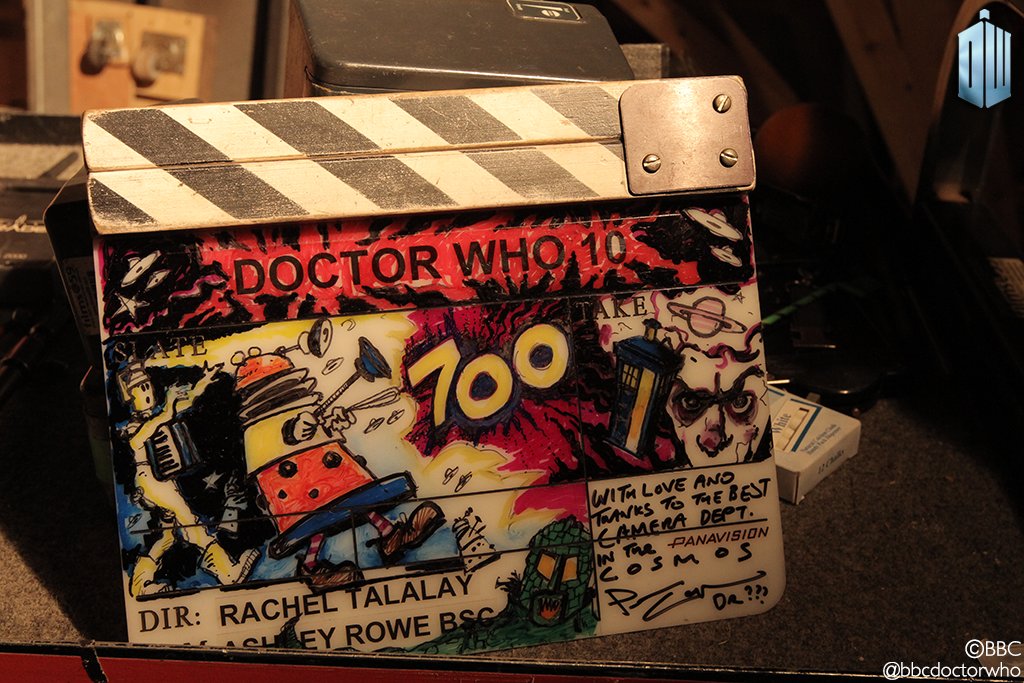 How many episodes will there be?

Steven Moffat: “Ahead of me this year I’ve got fourteen Doctor Who‘s…”

Steven Moffat: “I know that what I’ve signed on to do is 13 more episodes of Doctor Who – including a Christmas special. I’m trying to argue for slightly more than that, but we’ll see.”

When will it air?

Charlotte Moore, Controller of BBC One: “I have decided to schedule Steven’s big finale series in spring 2017 to bring the nation together for what will be a huge event on the channel. 2016 is spoilt with national moments including the Euros and Olympics and I want to hold something big back for 2017 – I promise it will be worth the wait!”

Steven Moffat: “If you’re talking about scheduling, that’s BBC One – they will speak.”

Private Eye: “BBC staff have recently been informed that showrunner Steven Moffat’s commitments to his other hit show Sherlock mean that there will be no full series of Doctor Who in 2016.”

Who will be the new companion?

Pearl Mackie was officially revealed as the new Doctor Who companion on Saturday 23 April 2016. She will join the show in 2017 as a character named Bill Potts.

Pearl Mackie: “I’m incredibly excited to be joining the Doctor Who family. It’s such an extraordinary British institution, I couldn’t be prouder to call the TARDIS my home! Peter Capaldi is such a brilliant actor, and his Doctor is such a wacky and wonderful character, I can’t wait to see what adventures are in store for him and Bill throughout time and space.”

Pearl Mackie: “[Being gay] is not the main thing that defines her character – it’s something that’s part of her and something that she’s very happy and very comfortable with … It shouldn’t be a big deal in the 21st Century. It’s about time isn’t it? That representation is important, especially on a mainstream show.”

Pearl Mackie: “She’s funny and geeky and vulnerable. There’s a goofiness to her and a big heart. She gets things wrong, she has a temper. I thought, ‘I know her. I could play her.’”

Steven Moffat: “Bill is someone who asks the questions that nobody has asked for 53 years. [She has the] irreverence and cheek to ask all the questions you’re not supposed to ask on Doctor Who.”

Steven Moffat: “She’s from now, yeah. I know there are rumours about her being from the 1980s, but she isn’t.”

Peter Capaldi: “A fine, fine actress with a wonderful zest and charm, [Pearl Mackie is] a refreshing addition to the TARDIS and will bring a universe of exciting new possibilities to The Doctor’s adventures.”

Pearl Mackie: “Reading the script at the audition I thought Bill was wicked. Fantastically written, cool, strong, sharp, a little bit vulnerable with a bit of geekiness thrown in – I can’t wait to bring her to life, and to see how she develops through the series.”

Charlotte Moore, Acting Director of Television: “Pearl brings a wonderful energy and lights up the screen. She will captivate Doctor Who fans old and new across the globe.”

Peter Capaldi: “Clara had prior knowledge of the Doctor. Now we have someone who knows very little about the Doctor.”

Mark Gatiss: “If you found a companion who is not at all what you think you might be looking for, but there’s an immediate spark [with their co-star], then the audience will respond to that.”

Jenna Coleman: “No, I know nothing, absolutely nothing. Once you’re out, you’re out!”

Who else will be joining the TARDIS?

Comedian Matt Lucas will also be a recurring character in Season 10, returning as Nardole from ‘The Husbands of River Song’.

Matt Lucas: “I’m so excited about these Doctor Who scripts I can barely sleep. I love how Nardole is becoming more textured.”

Matt Lucas: “I’m chuffed to bits that Nardole is returning to the TARDIS for some more adventures. I loved acting with Peter [Capaldi] and I’m excited to work with Pearl [Mackie].”

Steven Moffat: “Delighted and slightly amazed to be welcoming Matt Lucas back on to the TARDIS – and this time it’s not just for Christmas, he’s sticking around. One of the greatest comedy talents on planet Earth is being unleashed on all of time and space.”

Who are the writers?

Steven Moffat: “…we’ve had meetings today with two writers who’ve never written Doctor Who before. If I told you their names, your brain would explode … brilliant, prominent and amazing writers.”

Who are the directors?

Block 4 (Episode 5 and Episode 10) is directed by Charles Palmer (Doctor Who, Poldark).

Block 5 (Episode 6 and Episode 7) is directed by Daniel Nettheim (Humans, Line of Duty).

Block 7 (Episode 11 and Episode 12) is directed by Rachel Talalay (Sherlock, Doctor Who).

Steven Moffat: “I’ve spoken to [Peter Jackson] face to face, and he would like to do one. He accepts that there’s no money and that there’s no time, and it would have to be when he’s available… I think it will probably happen at some point.”

What should we expect from the Doctor?

Peter Capaldi: “I don’t think he was grumpy [in Season 8], he just can’t be bothered with dull human beings and their concerns. I think it’s an interesting combination now, because if you’ve been following this Doctor, you’ve seen him go through all those different colours and all those different places, and as for where he goes now, in Season 10, I don’t know, but he’s been put through the mill.”

Peter Capaldi: “I think by the end [of Season 9], he’s going, ‘Oh man, I was right, I should’ve remained cynical and closed off and suspicious'”

Peter Capaldi: “You have to come to it afresh and find new things – but that’s quite challenging and interesting. So I’m fascinated to know where we’re going to go. Because in some ways he’s much more amenable, but in other ways he’s even darker. So I think that makes for a very interesting character.”

Where and when will the stories be set?

Peter Capaldi: “I love seeing the Doctor being really confronted with the most cosmic of challenges. I love him really battling it out to save the universe from some awful threat which is cosmic. And I think we’ve got quite a lot of that coming up, so I’m looking forward to taking the Doctor to the forefront of the cosmic battlefield.”

Steven Moffat: “We’re planning one right now which is very much an Ancient World episode, but I won’t tell you which part of the Ancient World.”

What will the stories be about?

Peter Capaldi: “We began to reflect the modern world [in Season 9], I think possibly we’ll see more of that in the new season… I think that’s quite interesting when the show reflects the changing state of planet Earth as it is in 2016.”

Peter Capaldi: “It might be a little less emotional, sort of. I think the emotional elements of it will come as a surprise to people.”

Peter Capaldi: “I think it’s a very action-packed season. It’s a lot of space exploration, and a lot of excitement and drama.”

Will there be two-part stories again?

Steven Moffat: “We’re going back to more singles [in Season 10]. Two-parters worked brilliantly last year, but somehow, with the new companion, you want the simpler version of the show. Next year we will have some two-parters, but it will be back to one-parters mostly.”

Which monsters and villains will be back?

Pearl Mackie: “I’m not sure it will ever become ‘the norm’ seeing crazy monsters on set, but I cannot wait to meet some more! The weirder the better, bring it on!”

Peter Capaldi: “Well, [I’d like to visit] Mondas, obviously, as you know. I’d like to back to Vortis, let’s see what the Zarbi and Menoptra look like if we could spend the money they didn’t have. I’d like to see how the Axons are getting on. I’d like to go and see the moon landing from the moon.”

Peter Capaldi: “I’d like to see the Daemons [return]… I’d like the Axons to come back [and] I’d like to have a go at the Autons…”

Is Missy coming back?

Steven Moffat: “Oh, of course Missy will be back! How could she not be?”

Michelle Gomez: “I can say that I will be doing the next season.”